Chicken? Egg? Jewel?
So many ways to see things,
to know which came first. 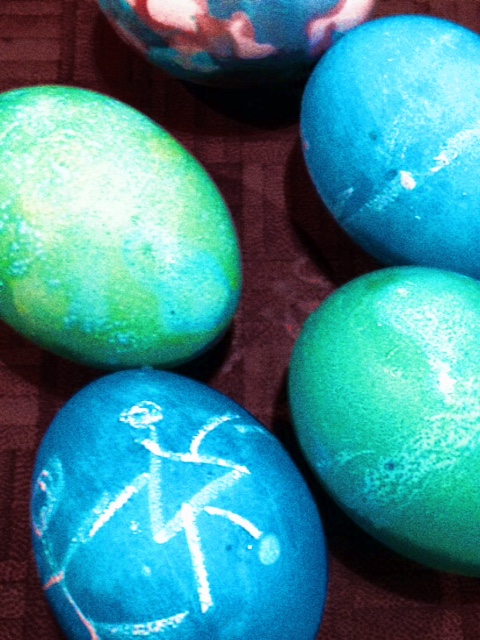 My best birthday present this year is how many of you are joining me in writing a haiku each day!
I've been doing this mostly on my own, every day in April, for seven years.
But it is such a fun and easy and accessible practice to share.

So if you're one of the folks who've been writing along with me -- thanks!
And if it's not, feel free to join in starting today!
No better occasion than a birthday to remind ourselves that it's never too late to start anew.... 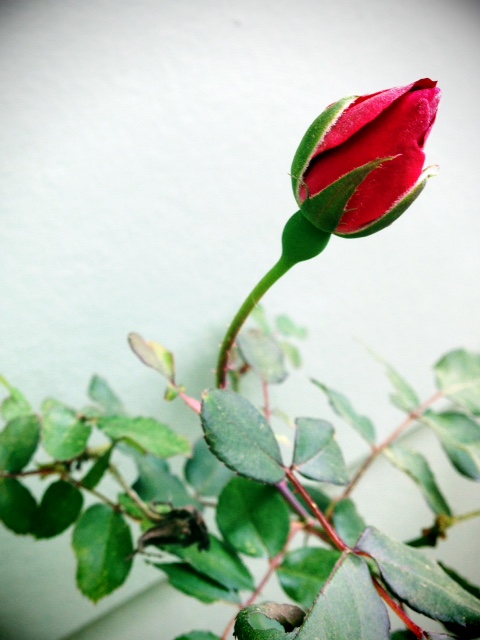 Here's my love letter
dear Iris, for your wild ways
and making me blush 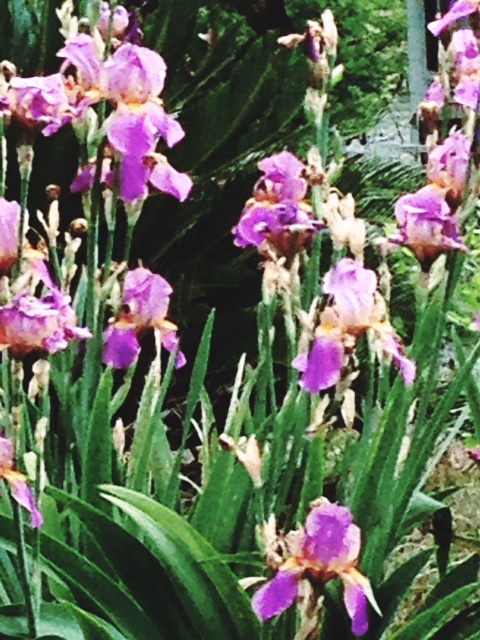 The Raccontino is a set of rhymed couplets where the second line of each couplet rhymes and the end of the first line of each couplet can be read vertically to make a statement or story! I know!! The guide I used also suggested using the same number of syllables in each line, so I did that although I don't think that's always part of the game.

Anyway, this process felt very chicken-and-egg to me. Do I make up the vertical story first? Or pick the rhyming words? Or just start writing and hope to high heaven? Who knows exactly how it all puzzled it out, but here's what I came up with. (The vertical poem is bolded):

I ask my skin and breath and heartbeat: How?
If even each spring blossom slips away

Then what to hold and trust, to know and do
that will not rot like wood, collapse, decay

Does the answer on the wind say you
or is that wild wishing, child’s play

I think of everything I’ve come to know
I gasp for breath, tip toes above the fray

The mourning dove and owl echo Who
I reach, I try to meet their songs halfway

And when I do, it’s you I’m singing to
Without answer, promise, sweet cliché

We use up minutes ‘til we both lose count
and look, it’s only time that we betray!

The things that last like birdsong, on and on?
Those things are us, at least another day.

I think you'll love some of Poetry Sisters' pieces:

And I'll be back later today with my daily haiku.
:)

Here's one of the cool things that's happening: A bunch of folks who aren't me have also set out to write a haiku every day this month, and they're sharing them on my facebook. That's what you guys should do, too! I'd love the company.

The 5-7-5 thing, that we learn in 3rd grade? That's an English/American construct. The poets writing in the original Japanese -- Basho and company -- wrote very spare poems in three phrases and sometimes counted on (which are sort of like syllables), but not always. Those poems closely resemble ours aesthetically, but I guess what I'm saying is: 5-7-5 is not a rule you have to follow.

That said, I am going to. I like having to work within that structure -- it's a fun puzzle. You do with it what you may.

The cooles thing about haiku, though, isn't the syllabics -- it's the kiru, or cutting, between one phrase and another. All this means is that in either the 2nd or 3rd line of the poem, there will be a surprise or juxtaposition. I love that even a tiny little wisp of a thing can do and say so much.

So, without further ado, today's poem....

Look who's caught off guard --
dog in the disallowed chair.
Squirrels run unopposed. 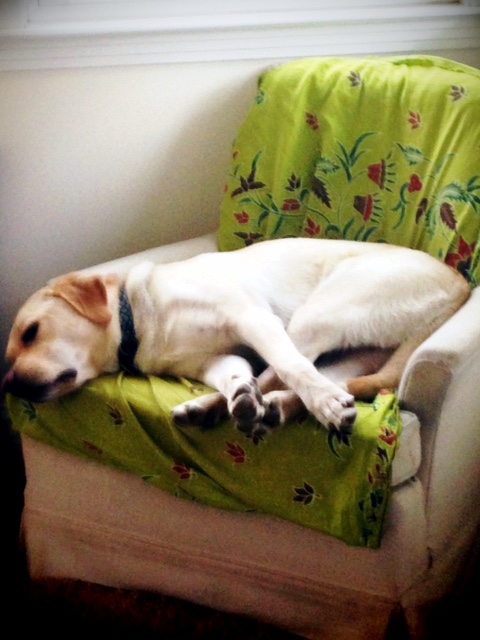 Oh, I'm so happy to welcome April to the world.

March behaved like a lion on both ends this year, and I'd like for life to be a little more lamb-like for awhile. No guarantees, of course, but it doesn't hurt that it is National Poetry Month, which means -- for me at least -- undertaking the practice of writing a haiku each day for the next 30 days.

I've been doing this for quite a lot of Aprils now, and it is the most lovely meditation and you're welcome to join me if you'd like. I'll be posting here, and on Facebook and Twitter, but you can participate in whatever way you'd like -- in my comments, on your own blog or facebook, in a journal.

I'll talk a little bit more about haiku over the next few days but for now I'll just say that in my mind, the purpose of this practice is to slow things down a bit, to take a breath and take note of what's going on around us. To devote just one small chunk of time each day to awe, humor, wonder, beauty or surprise.

Sky, are you up high
or in the rocky bottom?
Green clouds, glassy sea 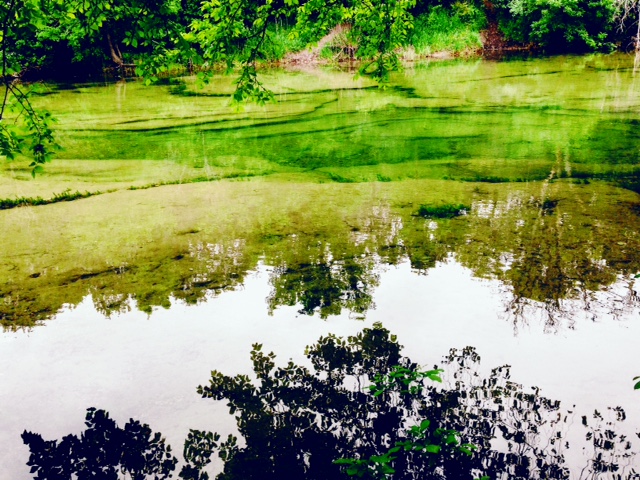 So, sestina was our chosen form for March.
Whether we liked it or not.
And I'm here to tell you that we mostly did not.
Whoa, boy, this form.

Six words that sit at the ends of the lines, over and over again in a varied but prescribed order -- at some point you just have to surrender and let the poem take you where it will. Little things like logic and meaning are sometimes sacrificed at this point. There is letting of blood and gnashing of teeth along the way.

But being that we didn't promise to post perfect poems all year -- just to ATTEMPT certain forms -- we're sharing them today and then moving on, quite giddily, to April -- well-known as National Poetry Month but now fondly looked at in our circle as I Don't Have to Write Another Sestina Month. :)

Oi vay. Here is my best effort to date...

I step outdoors into what makes no sense –
this season of promise, sweet like a lamb
except for the way it makes my heart break,
the way it teases with fat buds and hearty rays.
Standing in this golden moment, I wait for it to turn,
to sucker punch me, to throw me like a horse.

But instead I inhale and the sound breaks.
I yield like a chained dog, like a lame horse,
like the voice in me isn’t mine to raise.
I soak in the light with each and every sense –
I can taste it, I can touch it, this light soft as a lamb.
I am like a planet, around each beam I turn

and turn and turn and turn,
positively dumb with love, my windbreak
against the possibility of lion eating lamb.
My eyes close to everything I know, my voice hoarse
and raspy, I swear I make no sense
but it doesn’t matter ‘cause the barn’s raised

the barn of suckling and honey is raised!
The posts and beams of expectation turn
in the mud, it’s nobody’s job, no dollars or cents
change hands, just hammers and light, until we break
for lunch, laid out on long boards, horse
trough full of water, we lap at it like lambs.

In like a lion, they say, and out like a lamb,
but isn’t it the other way around, spring’s rays
tender, warming each cloverleaf, each haunch of horse?
We start off skeptical, but then feel ourselves turn –
we can’t help it – so by the time there’s a late freeze, a break
in the light, a lion’s roar, we’ve taken leave of our senses.

Thank God, and God Damn that lamb that turns
me once again, raises me up slowly like a flag, flying, til I break
and the horse heads back to the barn. I follow. I sense that’s right.


Here is where you'll find all this week's Poetry Friday posts.

Just thought I'd share, with anyone following along, the tentative calendar we Poetry Princesses have set for ourselves.
We reserve the right to chicken out or change our minds occasionally, but as of right this minute and in reverse alphabetical order (just for kicks) this is our plan for the year ahead. Gulp.

So, my pals and I started a year-long poetry project last month.
We kicked the whole thing off with triolets. They were hard.
And this month we said, "Villanelles!"

But really, they're not that bad.
They're actually kind of fun little puzzles.

Mine was inspired by this crazy story I read about King Tut's burial mask.
(To paraphrase, his beard broke off and they glued it back on with this really cheesy looking epoxy!)
But it also ended up being about the darkness -- or at least surprises -- hidden underneath some people's facades.

Upon a man, what’s regal as a beard?
Propriety and promise all in one.
We trust that things are just as they appear.

But what is underneath? It’s what we’ve feared –
the yellowed sheen of stories badly spun.
Upon a man, what’s regal as a beard?

Not much, until that gilded cloak’s been sheared
and now we’re left with everything he’s done.
We trusted things were as they’d once appeared.

And not just trusted – honored and revered.
The gold of all has chipped away to none.
Upon a man, what’s regal as a beard?

The truth unmasked, the cover disappeared!
No pharaoh here, a simple mother’s son.
We trusted things to be as they appeared --

a boy, a beard, these ancient myths we’ve reared,
from storied tombs that lie to everyone.
Upon a man, what’s regal as a beard?
The trust that what is true will reappear.

You like villanelles? Here are the amazing poems my poetry sisters crafted:

And Poetry Friday today is at Elizabeth Steinglass' Blog.
Happy day, everyone.....

This poor little neglected blog.
It's just been sitting here with its jacket on and its shoes laced up even though I've given it not a thing to do for ever so long.
Until now.

I am delighted to say that I -- along with my pals The Poetry Princesses (Sara Holmes, Tanita Davis, Andromeda Jazmon, Laura Purdie Salas, Tricia Stohr-Hunt and Kelly Fineman) -- have committed to 12 months of poetry challenges starting right this very minute.

Each month we'll take on a different form or theme and then we'll share our efforts on the first Friday of the month.
Usually.
At least that's the plan.

So. We started with triolets.
Eight lines. A very simple rhyme scheme.
No problem, right?

EXCEPT....
Iambic Tetrameter.
As my kids would say, "Awkward."

But because we seven are not just princesses but also brave warriors, we forged ahead.
And many tries later, here's mine.
(It was inspired by this story, which is awesome because it's about things like the dawn of creativity. Zoinks.)


Tricia is hosting Poetry Friday today, where you can find all of our triolets but also lots of poetic contributions by others.

And here are the rest of the triolets!

Now we're moving on to villanelles, which we'll share on February 6th.
Try one with us if you'd like!
Collapse